Looking to achieve DevOps with Flyway? Watch our latest webinar on the Redgate Hub ▶ Watch now

2015 is behind us and what an amazing year this has been for Flyway! Now that Continuous Delivery and database migrations are entering the mainstream, Flyway is seeing even more adoption and recognition than ever before. As a testimony of this, last year Flyway was honored with the highest distinction "Adopt" on the ThoughtWorks Technology Radar.

And it's really been quite a ride since the project's humble beginnings on Google Code (yes, that used to be a thing) in 2010. Every single year has come with tremendous growth, and last year was no exception. In fact Flyway passed 850,000 downloads in 2015 alone! 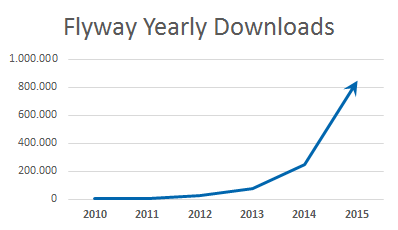 The highlights of this release are:

Versioned migrations are a great way to evolve your relational database schema. You can think of them as transformation functions you apply to your schema. They let you reliably evolve the structure of your database by creating, altering or dropping objects like tables and indexes. Versioned migrations are also a great way to evolve reference data or perform bulk corrections of user data.

There are however a few areas where they tend to create some friction. This usually occurs when you either manage code (think stored procedures, functions, packages, ...) or manipulate objects, like views, that don't physically hold data themselves. In those cases, it's easy to end up over time with many almost identical copies of the definition of the same objects scattered over many different migration files. This feels wrong and simply doesn't make sense when you could just as well be keeping the history within your version control system.

To better support these scenarios we are today expanding Flyway beyond versioned migrations and introducing a new type of migrations: repeatable migrations.

Here is a brief example:

As you can see we have a number of differences compared to versioned migrations:

You can now evolve the definition of this view within the same file. History will be kept in your version control system and Flyway will reapply this migration every time the checksum changes and previous runs will be marked as superseded.

The same migration will therefore appear multiple times in your history:

You can start using this today with both SQL and Java-based migrations.

As Flyway increasingly becomes our industry's de-facto standard for database migrations, the ever growing list of supported databases keeps on expanding. With Flyway 4.0, we are adding support for not one, but three new databases: SAP ASE (previously known as Sybase ASE), SAP HANA and Apache Phoenix:

Special thanks to SOFTRONIC for sponsoring SAP HANA support.

During the Flyway 3.x series we introduced a number of configuration options and lifecycle hooks including callbacks. Just like migrations, callbacks can be written either in SQL or in Java. When writing them in Java unfortunately there was no easy way to access Flyway's configuration. We decided to remedy this with Flyway 4.0. Both Java-based migrations and Java-based callbacks can now implement the ConfigurationAware interface (or inherit from either BaseJdbcMigration or BaseFlywayCallback) and gain access to the Flyway configuration which will be automatically injected at runtime:

We are strong believers in contract-first development and when it comes to the database, your schema is the contract between your application and the DBMS. This is a natural fit for tools like jOOQ that generate their persistent model directly from a freshly migrated schema.

Yet in the past Flyway's Maven, Gradle and SBT plugins looked for migrations in the target directory of the project, which created a chicken and egg situation where they only solution was to split the project into separate modules of which one would first migrate the database before the next one would then generate the persistence classes and compile the code.

We decided to fix this in Flyway 4.0 by changing the defaults where the Flyway build tool plugins look for migrations:

So if you don't need Java-based migrations, Flyway 4.0 will now be much easier to use with schema-first persistence frameworks like jOOQ.

Git has definitely won the version control system war. Yet it comes with this widely used "feature" called core.autocrlf=true which automatically adjusts the line endings of text files based on the operating system you currently use.

While this sounds great in theory it actually causes a number of problems with teams using different operating systems. One of them was Flyway checksum failures as the files now have different contents on Windows than they do on Linux and Mac.

To address this Flyway 4.0 now ignores line endings when calculating checksums and all existing checksums in your metadata table will be automatically adjusted on first run to be compatible with this new algorithm.

Clean is an incredibly useful operation in development. With a single command you can wipe your database schema completely clean of all its objects. This is a fantastic way to be able to experiment and quickly start over if things don't work out.

In production however, running clean is usually something you ever do once as it is severely career-limiting.

To prevent such disasters we are introducing an additional safety measure. By setting:

Flyway will now refuse to clean your schema until cleanDisabled is set to false again. We recommend all Flyway users to active this on their production environments immediately.

Last year has been a very busy year for us as next to Flyway, we also launched Boxfuse.

Boxfuse is the easiest, most reliable and secure way to run your JVM-based apps on AWS. It is based on three core principles:

Boxfuse has been designed from the ground up for Continuous Delivery and integrates naturally with Flyway. Boxfuse comes with special support for Spring Boot, Grails, Play, Dropwizard, Tomcat and TomEE as well as regular executable jar applications. It can use your framework's native configuration file to detect port and healthcheck information, based on which Boxfuse will provision AMIs, Security Groups, Elastic Load Balancers and Auto-Scaling Groups for you, with zero additional configuration required.

Boxfuse also detects whether your application uses MySQL or PostgreSQL and will automatically provision the necessary AWS RDS instances as well as configure your framework of choice to use the correct JDBC URL, user and password.

And if you choose to use Flyway directly to migrate your database on application startup, it is now as simple as:

as Flyway automatically picks up the database configuration exposed by Boxfuse.

We took the same principles you love about Flyway (simplicity, focus, power), and applied them to deploying applications on AWS.

If you have questions or need help, Flyway you can get answers via the flyway tag on StackOverflow as well as the issue tracker.

Over the last few years we seen increased demand to go further and also offer professional dedicated support to organisations who need guaranteed response times as well as the piece of mind knowing someone will be there when they need assistance.

Today we are opening up our professional support subscription program which we have offered to a selected number of clients in the past to all companies using Flyway. These are the three support tiers we are offering:

For more information about our professional support subscriptions, contact us at [email protected]

We would like to extend special thanks to SOFTRONIC for sponsoring SAP HANA support and Code Lutin for making a donation to the Flyway project.

Grab it while it's hot!

Flyway 4.0 is out and it is a big one. Flyway now expands beyond versioned migrations and offers Repeatable Migrations as well as SAP ASE (previousls known as Sybase ASE), SAP HANA and Apache Phoenix support. Additionally, Java-based migrations and callbacks now have an easy way to access the Flyway configuration, compatibility with schema-first persistence tools has been improved, Git's autocrlf issues have been relegated to the past, clean can be disabled and when running within Boxfuse instances Flyway now auto-configures its datasource.

This release packs in even more with a huge list improvements and bug fixes across the board.

Enjoy Flyway 4.0 and grab it while it's hot!

All users are encouraged to upgrade.

Flyway is brought to you with by Axel Fontaine, Boxfuse and the many contributors.

P.S.: Spread the word and don't forget to subscribe to our monthly newsletter below or follow @flywaydb to stay in touch.